The four species within the arcuata-schaefferi complex are problematic to distinguish and the species boundaries are unclear. The complex within Britain and Ireland consists of the species arcuata, brevicornis, notha and schaefferi.

Females of arcuata, in common with those of notha have have more rounded or blunt teeth that are shorter than the width of their base though there is evidence to suggest a continuum of variance between these and the more pronounced pointed teeth of brevicornis and the more rounded teeth of schaefferi. The hypopygium is deeply incised either side of the central point in common with brevicornis. The first tergite has the yellowing on the apical margin much reduced and often not reaching the lateral margin.

Males have the front femora largely marked with black on the inner face, this reduced to at most a thin line in the other species.

Flight period: Uni- or bivoltine, April to June and sometimes July to August 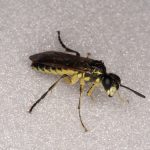 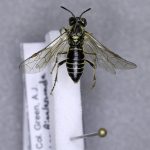 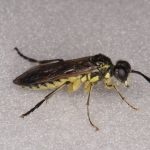