Globally, the Siricidae are thought to be originally located in the Nearctic, paleoarctic and oriental regions but have been translocated across continents via the timber industry. There are about 100 known species in 8 genera. 11 species occur in Britain with Urocerus gigas being the most frequently encountered. Urocerus gigas and Sirex juvencus are possibly the two indigenous species associated with Caledonian pine forests with the others being introduced. Of the six Urocerus species, it is thought that only Urocerus gigas and Urocerus augur are breeding in Britain and Ireland.

Siricidae are large, often colourful, sun-loving sawflies commonly referred to as wood wasps or horntails. They are characterised by a horn-like projection (cornus) on the final tergite (females) or sternum (males). The tegulae are vestigial and the forewing membrane is corrugated at the apex. The thread-like antennae have between 17 and 30 segments. The abdomen is cylindrical and the first tergite is divided along the centre line.

Females have a long, sturdy ovipositor which is used to drill into mature, and often dying, trees. Adults, and larvae, store spores of symbiotic fungi, which are also injected along with the eggs to help to breakdown the wood for digestion. Larvae mature within either conifers or hardwood trees pupating under the bark.

Females are more often encountered as males hold territory in the tree canopy. 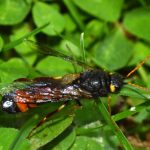 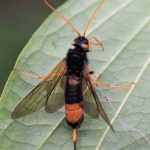 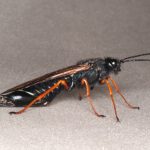