Similar in appearance to the much more frequently encountered Aneugmenus padi. This species is smaller at only around 5mm and the legs are a deeper yellow to orange colour (bright yellow in padi). The remainder of the insect is black. The head is shiny and lacks sculpture or puncturation.

In captive breeding experiments, although the eggs were laid on scarlet pimpernel, speedwells, forget-me-nots, etc., the emerging larvae did not feed on any vascular plants. Vikberg and Nuortiva report that Nesoselandria morio larvae feed on mosses, usually ones with broad lamellae. The larvae are grey, warty, and with a black head in early instars, the head becoming brown in the prepupal stage.

Jump to information on the genus Nesoselandria 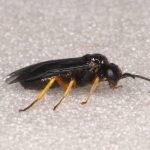 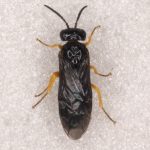 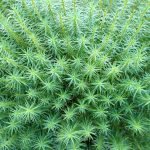