This Hoplocampa is one of two species associated with hawthorns. Very variable in colour but often predominantly pale orange above and below. However, the metanotum sutures are black in both males and females. In Hoplocampa pectoralis, and the similar Sorbus feeding Hoplocampa, the sutures are usually pale, but if they are dark then the mesonotal lobes will be entirely pale or tergites 3 to 6 will have lateral black dots. The mesonotum can vary from light orange to almost entirely black especially in some females. In males, the mesonotal lobes and basal tergites are at least marked with black but tergites never with a row of black lateral dots. The head is mostly pale orange with at least black ocelli. The stigma and wing venation are translucent yellow. The hind tarsus is longer than the hind tibia. Antenna are pale but may be infuscate or flecked with black.

Females cut and lay eggs into the ovary behind hawthorn blossoms. The larva feeds inside the developing fruit. The damaged fruit will drop before maturing, at which point the larva leaves the fruit and pupates underground. Larvae may migrate to a second fruit.

Jump to other species of Hoplocampa 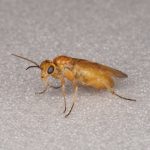 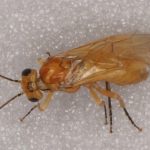 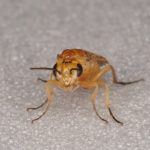 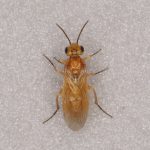