Fenusa pumila larvae mine the leaves of birch trees with a preference for downy birch.

Jump to other Fenusa species

Flight period: Bivoltine, May to June and July to August.

We are currently looking for images of this species. Please contact the webmaster if you can assist. 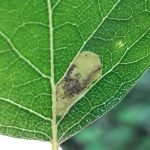