Globally, there are about 90 species found to the northern hemisphere. Many species have now been translocated around the globe by human activity. In Britain, there are 9 species in 5 genera. They are stocky, slow-flying sawflies associated with conifers. Their antennae are characteristically comb-like in males and serrate in female. The antennae have between 9 and 20 segments. The forewing lacks vein 2r and the hindwing has two middle enclosed cells.

Larvae can be pests of forestry especially on pine trees. They are free-living, often gregarious, with 8 pairs of abdominal legs. They generally overwinter as a pre-pupa inside a silken cocoon. However, Neodiprion sertifer overwinters as an egg.

The phenology of the Diprionidae is often complex with some species (e.g. Diprion pini) fluctuating between a single generation (univoltine) or two generations (bivoltine) dependent on climatic conditions. Most damage to commercial conifer plantations occurs when species have a bivoltine year as numbers can build up rapidly. The duration of emergence of a single generation can be prolonged with adults from the same brood emerging at different times over several months. In this case it is possible that individuals from the first generation can overlap with second generation individuals. 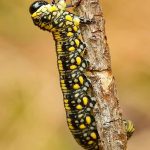 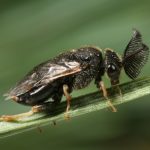 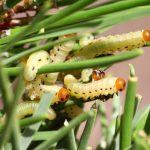 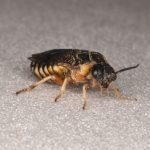 Goulet, H., 1876. The genera and subgenera of the sawflies of Canada and Alaska: Hymenoptera: Symphyta. The Insects and Arachnids of Canada (Part 20). Agriculture Canada Publication.