A black insect with white on the legs. The third antennal segment is shorter than the fourth and fifth combined. Hind wing with 2 enclosed middle cells. The hind basitasus of the female is white in the basal half and the hind tibia at least one-third white basally.

All Caliroa larvae are slug-like in that the trunk is coated with a translucent mucus membrane. Consequently, the body colour of the larva is largely dependent on the colour of the gut contents. It is generally considered that Caliroa cinxia have a more yellow tint than does annulipes, though this may be constricted to the thoracic region and, according to Schönrogge, may not be at all apparent. The primary characteristic for separating the two species is the colour of the head capsule that in dorsal view is hidden by the thoracic mantle. In early instar cinxia larvae the head capsule is dark becoming uniformly reddish brown in later instars. Early instar annulipes have a pale head capsule which also becomes reddish brown in older instars but retaining a dark bar between the temples. They pupate in the ground and emerge after 2-3 weeks, or overwinter to emerge the following May.

Jump to other Caliroa species

Flight period: Bivoltine, May to August 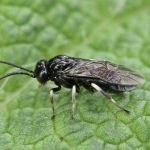 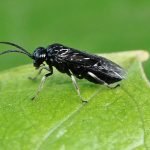 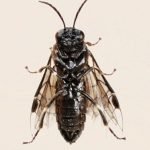 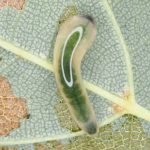 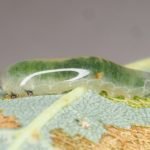 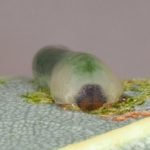 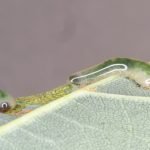 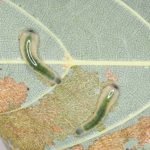