The only Athalia species in Britain and Ireland with dentate claws. Each claw has a single tooth about one third of the way along. The mesonotum is normally black but may be tinted orange at the margins and on the scutellum. In the specimens examined, both males and females are orange on the lateral and ventral surfaces of the thorax marked with black on the mesepimeron and metapleuron (ie in the sides of the thorax beneath the wings). May also have some infuscation to the upper, front surface of the mesepisternum. All tibia usually ringed apically in black, although this may be reduced to almost imperceivable infuscation on the front and middle tibia, especially in males.

Larvae of Athalia scutellariae feed only on skullcap in wet places.

It should be noted that Athalia species have a tendency to fly in multi-species aggregations and presence of the foodplant alone is not sufficient for identification.

Jump to other Athalia species 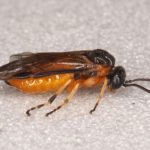 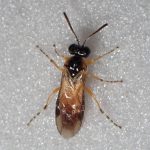 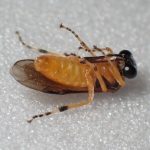 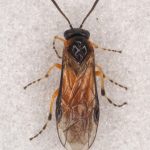 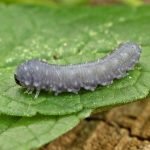 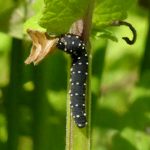 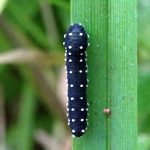 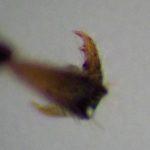