One of the black and yellow species. Arge cyanocrocea has a dark band across the forewings beneath the stigma and extending right across the wing. Basal to the band the wing is yellowish and apical to the band the wing is grey. The hind legs are normally yellow with black apices to the femur, tibia and tarsus. However, the amount of black is variable and the hind femurs can be entirely black. The similar Arge melanochra has entirely black hind femurs but the dark wing smudge does not extending all the way across the wing. Identification can be confirmed by the venation in the hind wing.
Adults visit umbels of hogweed, etc.

Jump to other Arge species 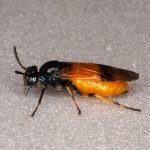 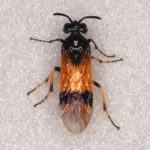 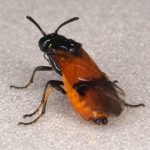 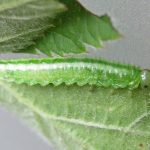