One of the Euura species that has a green background colour with black markings. The female is very variable in the amount of black on the body with spring and northern specimens sometimes almost entirely black on the thorax and abdomen. The summer generations exhibit more green colouration. In the summer generation females there is often an anchor-shaped dark mark on the otherwise green scutellum but the scutellum may be entirely green. The ocelli are black but the area posterior to the ocelli is predominantly green often with a black longitudinal line central to the postocellar area. In the male the mesopleura are mostly pale and the inner eye orbits are yellow or white. The postocellar area of the male is very short, such that the distance between the hind ocelli and the postoccipital carina is barely greater than the diameter of a single ocellus.

Larvae are slender and green with a white dorsal stripe, a pale head with a vertical brown stripe through each eye. They feed on various willows. Summer generations develop rapidly and spin a silken cocoon in leaf axils and growing tips. They remain in the cocoon for as little as one week.


The National Biodiversity Network records are shown on the map below. (See terms and conditions) 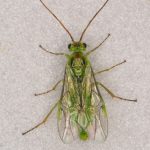 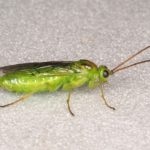 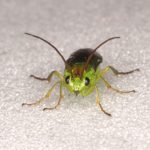 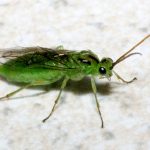 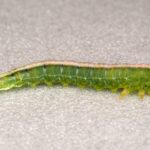 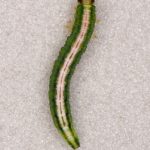 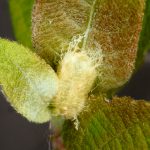